Watson, world No. 10 with nine PGA Tour wins, will play a Volvik ball and also wear Volvik's logo on his sleeve, the Seoul-based company said.

The 2012 and 2014 Masters champion becomes the biggest star to play Volvik, which has been best known for its ties with Korean-born LPGA Tour winners Lee Mi-hyang, Lee Il-hee and Chella Choi.

The two sides have agreed not to disclose the terms of Watson's deal, though industry sources said the golfer will make more than US$1 million per year.

Watson, one of the PGA Tour's longest hitters famous for the pink shaft of his driver, told the U.S. media he might rotate between white balls and pink balls.

He showed up for this week's SBS Tournament of Champions in Kapalua, Hawaii, in a Volvik shirt and with the new Volvik ball called "White Color."

Watson, who used to play the Titleist ProV1x, said he got interested in Volvik while watching the World Long Drive Championship last year. Then his management team had some Volvik balls for him when he returned from a tournament in China two months ago.

"I took five balls out and hit all kinds of shots," Watson told Golf Digest. "Teddy (Watson's caddie Ted Scott) bought some and tested them as well. And we couldn't come up with anything wrong with them. Then it comes down to the fun factor -- how could you not want a colored ball when you have a colored driver. I can hit a shot and tell you if it's good or bad."

Watson was fourth on the PGA Tour in average driving distance last season at 310.6 yards. He has led the tour in driving distance five times, most recently in 2014, and has finished second four times.

Moon Kyung-ahn, chairman of Volvik, said he expects the company's U.S. sales to more than double thanks to Watson's endorsement.

"So far, we've had three LPGA Tour winners, but this will be an opportunity for us to shed the image of just being a ball manufacturer for female players," Moon added. 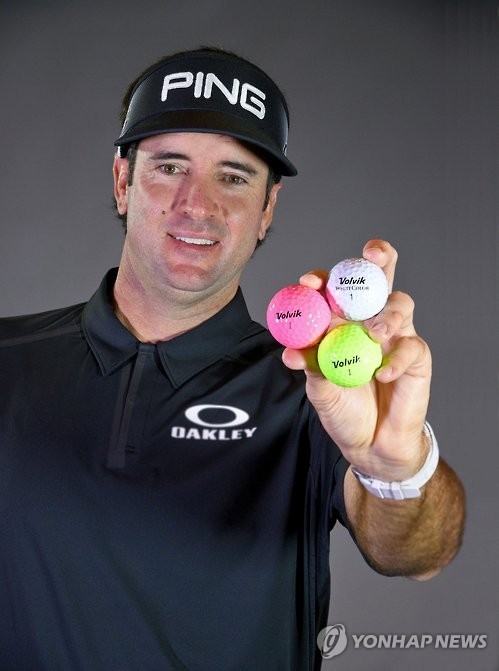