CHEONGU, South Korea, Jan. 3 (Yonhap) -- North Chungcheong Province, which began an international martial arts competition last year, has requested the government to approve the next competition as an official international event in a bid to make it the "Martial Arts Olympics," a provincial official said Tuesday.

The province will also launch the Secretariat for the World Martial Arts Masterships Committee (WMC) within the month for the persistent and stable opening of the event, the official said.

The province and the city of Cheongju, 137 kilometers south of Seoul, jointly hosted the 1st World Martial Arts Masterships from Sept. 3-8 last year, with some 1,900 athletes and officials from 81 countries taking part in 17 events, including taekwondo, judo, kickboxing, kendo, karate and jiu-jitsu. 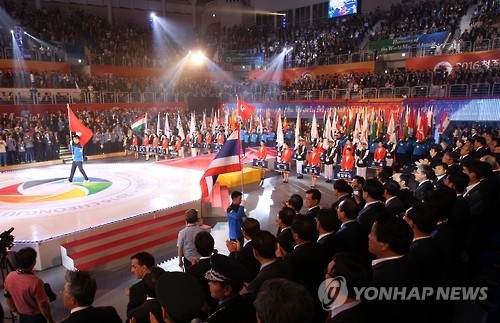 The province recently submitted a plan to the Culture and Sports Ministry seeking government financial aid to open the 2nd World Martial Arts Masterships for an eight-day run in August 2019, the official said.

The second competition is planned to feature 20 sporting events bringing together 4,000 athletes from 100 countries, according to the official.

"A final decision on the event's status is expected to be made in August after reviews and feasibility studies of the sports and finance ministries and Korea Development Institute," the official said.

Launched last year, the 35-member WMC said earlier that it plans to hold the third mastership overseas in 2021 to develop it into a world-class event.
(END)