SEOUL, Jan. 3 (Yonhap) -- Minor potential candidates of South Korea's next presidential election said on Tuesday they will continue to expand welfare policies despite the criticism that the ideas are populist, adding their focus would be on eliminating social inequality.

Seongnam Mayor Lee Jae-myung and Seoul Mayor Park Won-soon, who have been criticized by conservatives for being either "populists" or "leftists," argued at a town hall meeting at the National Assembly that additional welfare policies will not be a burden for the country as long as the government properly collects and spends taxes.

"When we provide support to companies, we call it subsidies," Park said, claiming that providing financial aid to the socially vulnerable should not be viewed as a wasteful spending of taxes.

Park said he will seek to overcome the existing structure of inequality.

"We can roll out all the welfare policies I've cited previously if we cut useless expenditures and collect the right amount of taxes from the people," Park added.

The Seoul mayor also vowed to reduce the number of irregular workers in local industries and set their salaries higher than regular employees, taking a cue from Australia.

Lee echoed the view, adding that South Korean policies have been focused more on corporations than workers.

The Seongnam mayor promised to take more aggressive steps to criminally punish business tycoons for their links to the influence-peddling scandal which led to the impeachment of President Park Geun-hye.

"We need to take actions which were unimaginable in the past to dismantle the conglomerates. The first step is to arrest Lee Jae-yong (the heir apparent of Samsung Group)," the politician claimed.

According to a survey conducted by top newswire Yonhap News Agency and top broadcaster KBS, Lee and Park, who are both members of the Democratic Party, posted 12.4 percent and 3.1 percent approval ratings, respectively, and are trailing frontrunners Moon Jae-in, the former head of the Democratic Party, and former U.N. Secretary-General Ban Ki-moon.

The debate comes as South Korea may hold an earlier-than-expected presidential election in 2017 as the Constitutional Court is currently reviewing the legitimacy of President Park Geun-hye's impeachment passed by parliament in December. If the court approves the ouster, an election to pick the chief executive should take place within 60 days. 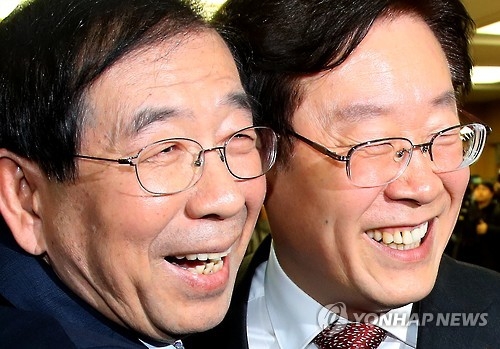