SEOUL, Jan. 3 (Yonhap) -- The mobile Internet is found to be the most frequently used medium among South Korean teenagers outstripping TVs, newspapers and other traditional media, according to a survey released Tuesday.

The study, conducted from June 23 to July 29, also showed that one in four teens have experience using one-person broadcasting on online platforms such as YouTube and South Korea's AfreecaTV.

The Korea Press Foundation unveiled the results of their "2016 Media Usage by Teenagers" survey based on one-on-one interviews with 2,291 teenage students nationwide.

It showed 91.7 percent of the respondents used the mobile internet at least once during the week before the poll, followed by television (82.6 percent). Those using radio, newspapers and magazines were only 19.8 percent, 11 percent and 10.5 percent, respectively.

For news consumption, the mobile Internet turned out to be the most frequently used media (58.1 percent), followed by television (46.9 percent).

The research also highlighted the popularity of one-person broadcasting, which was found to be used by 26.7 percent of those surveyed, higher than the ratings for radio and newspapers.

Teenage boys were found especially to tune in to the new media format more frequently than girls (33 percent vs 19.8 percent). Middle schoolers used the medium most heavily at 32.2 percent, followed by high school students (24.8 percent) and elementary school students (22.6 percent).

More than 77 percent of the users of one-person channels responded that they accessed it for playing or watching online games. "Meokbang," or an online broadcast where a host eats a heavy meal while interacting with viewers, came at a distant second with 26 percent. 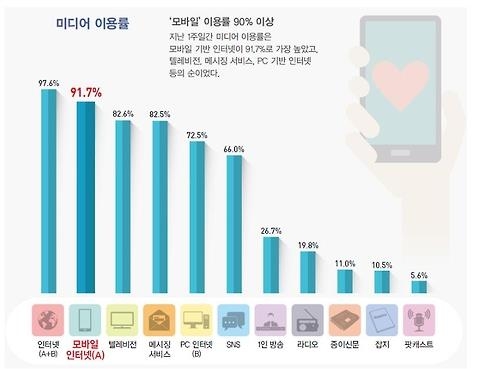