"This year, North Korea is expected to seek recognition as a nuclear state and may continue to overturn South Korea's inter-Korean policy and the international sanctions regime," the ministry said in a statement.

North Korean leader Kim Jong-un said in his New Year message that North Korea is in the final stages of preparing to test-fire an intercontinental ballistic missile in the latest sign that the country will not abandon its nuclear and missile programs.

Pyongyang conducted two nuclear tests last year alone following those in 2006, 2009 and 2013. It also launched around 20 ballistic missiles in 2016 including the intermediate-range Musudan and those launched from a submarine.

The United Nations Security Council slapped tough sanctions on the North twice for its nuclear tests in January and September.

Thae Yong-ho, a high-profile North Korean defector and former ranking diplomat, said last week that the North's leader is determined to complete the development of nuclear weapons by the end of 2017.

Last year, inter-Korean ties fell to one of the lowest points due to North Korea's nuclear and missile provocations.

In February, Seoul shut down a joint industrial complex in the North's border city of Kaesong, ending the last remaining symbol of inter-Korean reconciliation.

The government said that North Korea's willingness to give up its nuclear weapons should take precedence if the two Koreas are to hold meaningful dialogue.

"North Korea does not seem to have an interest in denuclearization, as Kim's New Year message showed. At the current stage, we are not considering proposing dialogue to the North," Unification Minister Hong Yong-pyo told reporters.

Kim Nam-jung, the head of the ministry's unification policy office, said that resuming the complex would not be easy, given the U.N. sanctions imposed on North Korea last year.

"There may be many limitations (in resuming the Kaesong Industrial Complex). It is hard to gauge the current situation at the factory zone, but it is believed that there are no signs that North Korea moves equipment out of the complex."

The ministry, meanwhile, said that it seeks to allow civic groups to provide humanitarian assistance to socially vulnerable people in North Korea, including infants, after taking into account various factors such as necessity and urgency. 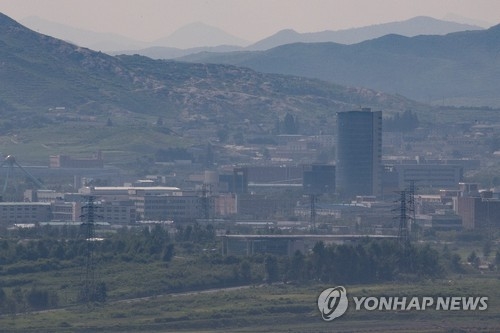