SEOUL, Jan. 3 (Yonhap) -- The blooper reel of Korean action film "Master" has been released amid its huge popularity in local theaters.

The short video clip released Monday features the high profile leads Lee Byung-hun, Kang Dong-won and Kim Woo-bin cracking jokes and messing up while filming for the movie, making everyone burst into laughter. The clip has garnered much attention as it adds a human touch to the top actors' flawless performances of vivid car chases and tense gun fights throughout the movie.

The crime action flick revolves around a multibillion-dollar heist plotted by Chairman Jin, a notorious swindler, and the head of the police's intelligence crime unit who chase him. Jin's right-hand man, who is an expert computer programmer, also has a big role. Lee plays Chairman Jin, Kang takes on the role of the police officer and Kim plays the programmer.

"Master," which premiered on Dec. 21, is creating buzz among local fans, accounting for 66.3 percent of total box office sales the day of its release.

Cho Ui-seok, the director of "Cold Eyes" which drew over 5 million viewers in 2013, took the helm. 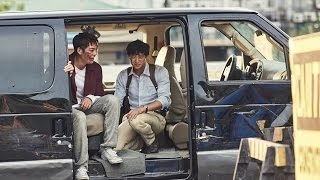