SEOUL, Jan. 4 (Yonhap) -- The first trailer for the upcoming Korean film "Fabricated City," set for its premiere in February, has been released.

Another anticipated domestic flick of the new year follows the struggle of a man to get off the hook as he is accused of a crime he didn't commit.

Spectacular sights of hefty battlefields open the clip. Shot-down jets, parachutists jumping off the aircraft and hordes of special forces grappling with each other amid blood and bullets in the air, combined with realistic special effects, are reminiscent of military strategy video games.

Gwon-yoo, portrayed by Ji Chang-wook, is Napoleon Bonaparte in this world. Everyone follows his commands and no adversaries are a match for him.

Back to real life, however, cracks soon emerge and life seemingly refuses to pan out as he hopes. He is only another regular unemployed youth in Korea who doesn't have much to do but hang around in a PC bang.

Convinced he has nothing to lose, he gets in trouble that pulls him into a deeper downward spiral. He is charged with murder out of the blue and he knows he's been set up.

Teaming up with his video game mates, Gwon-yoo goes toe-to-toe with his unknown foes to clear his name.

Ji, a promising actor on the verge of being a superstar, is one beautiful man, with chiseled features resembling Michelangelo's David. He takes the role of Gwon-yoo, the protagonist in "Fabricated City," and it marks the first film in his nearly a decade-long acting career.

It might be an engrossing but risky task for a first-timer like Ji to lead a fairly high-budget film, but he has been consistently proving himself as worth more than good looks over his past acting years, particularly with his latest serial TV drama "The K2."

"Fabricated City," directed by Park Kwang-hyun, who did "Welcome to Dongmakgol" as well, is set to hit theaters in February. 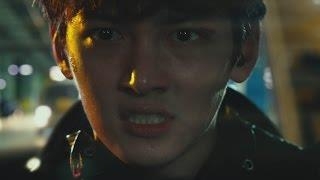