SEOUL, Jan. 4 (Yonhap) -- Inspired by a successful career change by another athlete, short tracker-turned-speed skater Kim Bo-reum says she's determined to cap off her impressive recent run with an Olympic gold on home ice next year.

Once a mediocre short tracker at best, the 23-year-old is now the world's top-ranked speed skater in mass start. After winning a silver in mass start at last year's world championship, she has won two gold and two bronze in the event during the current International Skating Union (ISU) World Cup Speed Skating season.

In mass start, 24 skaters race around the oval all at the same time for 16 laps, with some physical contact allowed. And as a former short tracker well-trained to make passes, Kim has thrived in the event introduced in the 2014-2015 season.

In a recent interview, she said she has Lee Seung-hoon, a former short tracker who went on to win Olympic medals in speed skating, to thank for inspiration. 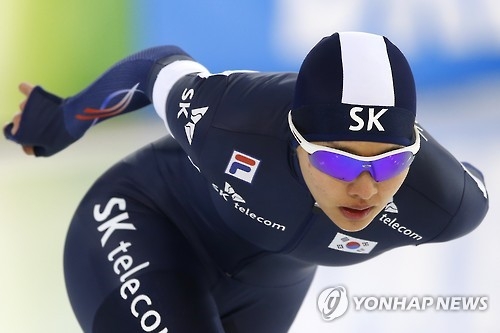 "In high school, I'd hit rock bottom in both athletics and academics, and I was about to quit skating altogether," Kim said. "Then I was watching the Vancouver Winter Games, and Lee Seung-hoon won the men's 10,000m gold medal. And I started feeling motivated to challenge myself in a new environment."

Kim recalled that virtually everyone in her circle, including her own parents, didn't approve of her switch. But she pressed on, and in May 2010, three months after Lee's surprise gold in Vancouver, Kim made the transition.

"I was a late starter in short track and again in speed skating, but I felt so much at ease," Kim said. "I think it was because I had nothing to lose."

Obviously, going from short track to speed skating wasn't simply a matter of putting on new skates and racing on a longer track. Everything from training and race management to even muscles used would be different.

"The toughest thing was I had to beat myself," Kim said. "In short track, you just have to skate faster than others. In speed skating, it's a battle against time." 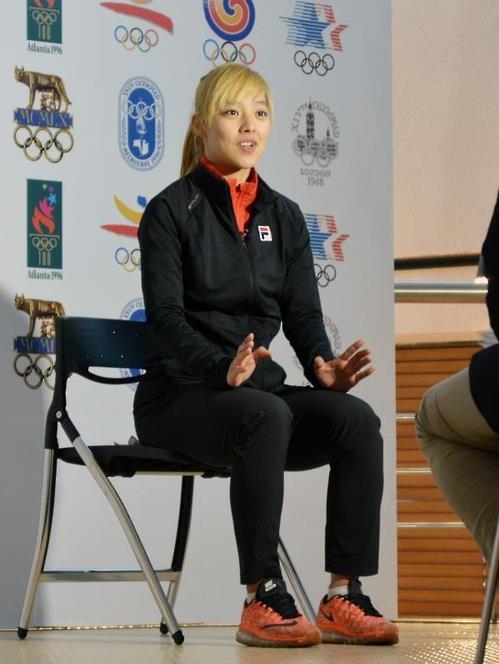 Still, Kim has been growing by leaps and bounds, thanks to her explosive speed and endurance.

After making the national team in December 2010, she won a silver in the 3,000m at the 2011 Asian Winter Games. And when mass start joined the ISU competitions, Kim said she felt it would be right in her wheelhouse because of her short track background.

Kim leads all skaters in the ISU World Cup points race in mass start, and she has turned her eyes to the 2018 Winter Olympics in South Korea's PyeongChang.

"I really want to win gold medals at the Asian Winter Games and the world championships in February," Kim said. "And further down the road, I am building up for PyeongChang. If I can keep following my plans, I should be able to post good results."

Kim said she has been doing some short track training with Lee Seung-hoon to help improve her speed.

"My focus is on minimizing my weaknesses," she added. "I hope to have the most perfect race of my life in PyeongChang."