SEJONG, Jan. 4 (Yonhap) -- South Korea will invest nearly 14 trillion won (US$11.6 billion) into new energy industries such as solar power this year in a bid to foster the potential sectors as the country's new growth engines, the ministry here said Wednesday.

The Ministry of Trade, Industry and Energy said investment made by the public and private sectors will reach a combined 13.8 trillion won in 2017, up 25 percent from the previous year's 11 trillion won.

"In particular, the private sector's investment will soar 66 percent from a year earlier," the ministry said. "Financial investments like funds and project financing will increase and businesses will expand their facilities."

As part of the project, the Korea Electric Power Corp., the state-run electricity supplier, signed a memorandum of understanding with LG Uplus Inc., the country's third-biggest wire service provider, to spend a combined 500 billion won on building 2,000 smart energy factories in the coming 10 years.

Such smart factories are powered by solar energy and run by high-end information technology that increases energy efficiency by 20 percent, according to the ministry.

The financial sector will also join the move as Shinhan Bank and Samsung Card Co. will come up with financial instruments related to the energy storage system, the ministry added. 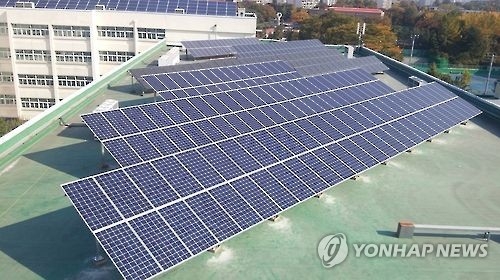