SEOUL, Jan. 4 (Yonhap) -- South Korea's exports to China and the United States will likely rebound from negative growth last year on increased spending in the world's two largest markets and the recovery of global oil prices, a report suggested Wednesday.

The report from the state-run Korea Trade-Investment Promotion Agency (KOTRA) attributed the sharp drop to a dip in demand for South Korea's consumer goods, as well as China's own exports.

"First of all, exports of consumer goods to China were dealt a serious blow as China's economic growth slowed to 6.7 percent," the report said. "In addition, a 6.6 percent on-year drop in China's exports by the end of September due to a global economic slowdown dealt another severe blow to the country's exports to China," it added.

The report noted industrial materials and parts used to produce Chinese end products accounted for nearly half of South Korean shipments in the first half of 2016. 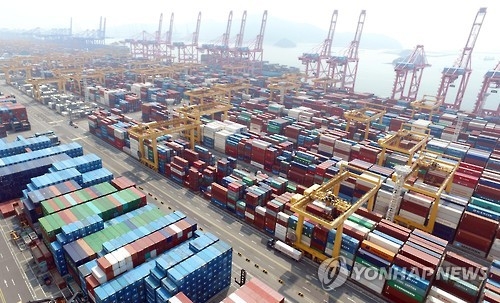 In 2017, however, most of such factors that led to a drop in South Korean shipments to China will either be removed or eased, it said.

For instance, the report insisted China's economic growth will be in the high 6 percent range, expanding the country's demand for consumer goods.

Many others, however, have suggested China's economy will likely grow in the low 6 percent range.

In a separate report, KOTRA said the country's exports to the United States will also likely increase this year, citing a recent improvement in key economic indicators in the U.S., including consumer spending.

"The United States is expected to post an annual growth in the low 2 percent range on a recovery in employment and spending," it said.

South Korea's shipments to the United States slipped 4.8 percent from a year earlier in 2016, while the country's overall exports dropped 5.9 percent on-year, according to the trade ministry.