Other celebrities, including members of boy groups SHINee and VIXX, wished for the movie's success at the event.

"I'll be cheering for the film's success," said Do, better known as the idol singer D.O of boy group EXO.

Hwang, who shot to fame by revealing his musical prowess in a KBS singing competition, came along with fellow cast members of the SBS reality show "Law of the Jungle," to cheer for Yoo In-young, one of the main actresses of the film who also starred in the variety program.

The story of "Misbehavior" revolves around Hyo-joo, a schoolteacher employed as a contract worker, feeling victimized by Hye-young, one of her fellow teachers, whom she believes was unfairly offered regular employment instead of her thanks to her affluent background.

The movie comes to theaters Wednesday. 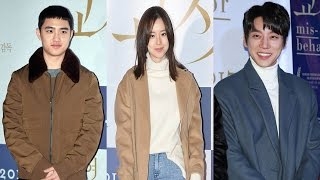