During the New Year's policy briefing session on defense and diplomatic affairs, Prime Minister Hwang Kyo-ahn also called on deepened defense cooperation with the United States, stressing the continued development of the alliance is essential for peace and stability on the Korean Peninsula.

Hwang assumed presidential duties on Dec. 9 after President Park Geun-hye was impeached by parliament over a string of corruption allegations.

Over the past year, Pyongyang has ratcheted up tensions with two nuclear tests in January and September, and 24 ballistic missile launches, which prompted two new packages of toughened sanctions by the United Nations and separate stand-alone punishments by South Korea, the United States and Japan.

"This year is a critical period that could become an inflexion point in North Korea's nuclear problem," Hwang said, noting Pyongyang's nuclear program poses the greatest challenge to his country's security and its efforts to lay the foundation for reunification. 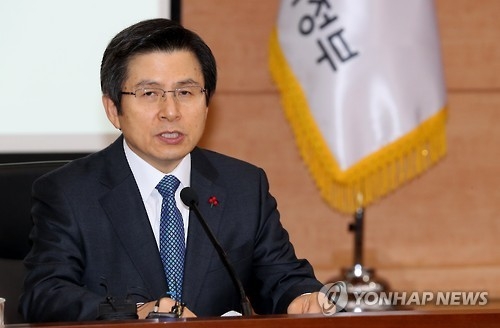 "(We) should push to make the concrete outcomes of our sanctions and pressure (against North Korea) more tangible through three pillars -- sanctions at the U.N. Security Council level, coordinated unilateral sanctions and global pressure on the North," he added.

While stressing the importance of the Seoul-Washington alliance in coping with the North's escalating nuclear and missile threats, the acting president pointed to the need for "strategic communication" with China, Japan, Russia and other countries in the denuclearization efforts.

"Based on the South Korea-U.S. combined defense posture, (we) have to maintain a firm readiness posture in order to deter North Korea's additional provocations, and sternly and clearly retaliate if provoked," he said.

Hwang, in addition, ordered defense officials to keep vigilance to counter North Korea's cyberthreats, which he said have become "real."

Touching on North Koreans suffering from human rights abuses and poverty, he vowed to continue Seoul's policy to shine light on their agony and strive harder to help North Korean defectors successfully settle in South Korea.