Police have handed the case over to prosecutors after investigating Kang for leaving the scene of a DUI accident in the nation's capital on Dec. 2.

It was Kang's third DUI arrest, which resulted in revocation of his license.

Kang fled the scene after crashing into a guard rail on his way to his hotel in southern Seoul. In the immediate aftermath, a friend of Kang's in the passenger seat, only identified by the surname Yoo, reported to police as the driver of the vehicle. Police analyzed the black box inside the vehicle and determined that Kang had actually been behind the wheel.

Police are also seeking indictment of Kang's friend. They said they couldn't clearly establish that the two had intentionally misled police or that Kang had specifically asked Yoo to offer false testimony at first.

Kang, who has two major leaguer seasons under his belt, also faced sexual assault allegations that emerged in Chicago in July.

Later Wednesday, Kang was dropped from the national team for the 2017 World Baseball Classic (WBC) scheduled for March, a move that had been anticipated since earlier this week. 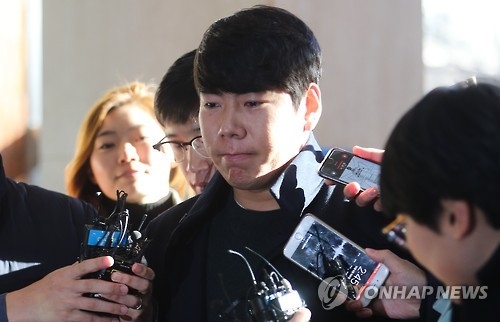