SEOUL, Jan. 4 (Yonhap) -- North Korea on Wednesday called for efforts to fully implement the country's five-year economic development plan based on self-reliance principles in the face of tough international sanctions.

The year 2017 is a meaningful year which should be devoted to carrying out the economic development strategy laid out by the North's leader Kim Jong-un, the Rodong Sinmun, the North's main newspaper, said in its commentary.

At a party congress held in May 2016, Kim presented the five-year strategy for economic growth, stressing the need to improve the people's livelihood and ease an electric power shortage. But his vision largely lacked details and specific targets. 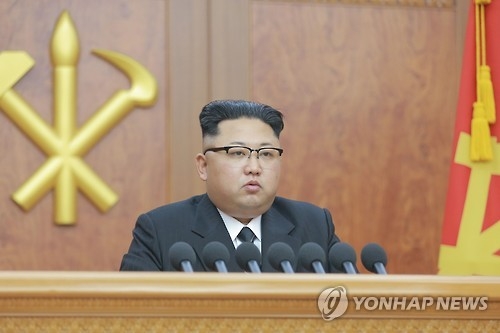 The North's leader stressed in his New Year message that it is needed to actively push for attaining the goal of the economic strategy "by dint of the self-reliance and self-development."

North Korea's economy is estimated to have contracted 1.1 percent on-year in 2015, marking the worst performance since a 1.2-percent decline in 2007, according to South Korea's central bank.

The economic contraction came after the North's moribund economy grew for the fourth consecutive year in 2014. The repressive regime's economy may have contracted again last year as it was slapped by stronger U.N. sanctions for its nuclear and missile tests.

"For the North's leader, his top policy priority would be placed on overcoming the international sanctions regime," said Lim Eul-chul, a professor at the Institute for Far East Studies of Kyungnam University. "Pyongyang is likely to mobilize all available resources and labor to implement its economic strategy."

In his New Year speech, Kim made it clear that his country has no intent to give up its nuclear and missile programs.

He said his country is close to test-firing an intercontinental ballistic missile (ICBM). Pyongyang is widely seen as seeking to develop a nuclear-tipped ICBM capable of reaching the U.S. mainland.