How and where the president will deliver the message has yet to be decided, but political watchers anticipate her message is likely to come before the holiday when family gatherings tend to reshape public opinion. The four-day holiday begins Jan. 27.

"If need be, the president will come forward and talk (about her stance)," a source from the ruling bloc told Yonhap News Agency on the phone, declining to be identified. "(Her message would) likely come before the Lunar New Year's holiday."

Park was impeached on Dec. 9 over a corruption scandal centering on her longtime confidante Choi Soon-sil. She has since been suspended from exercising her duties with Prime Minister Hwang Kyo-ahn taking on the role of acting president.

Her move to openly defend herself comes as the Constitutional Court is accelerating its legal review of her impeachment. The court is to determine whether to unseat or reinstate her after its deliberation that could last up to six months.

Observers say the nine-justice court could render its ruling as early as March, by which the terms of two justices will have ended. For her to be removed from office, six out of the nine justices must vote against her reinstatement.

On Sunday, Park already held a press meeting where she repeated her denial of all corruption charges. The meeting drew sharp criticism from opposition parties, which argue it is illegitimate for a suspended president to use presidential quarters and resources to meet with the media.

"President Park cannot delay the impeachment clock with her cunning media campaign and lies," Rep. Choo Mi-ae, the leader of the main opposition Democratic Party, said during a meeting with senior party officials.

On the other hand, the meeting did shore up support from conservatives who have started to voice their grievances on the "unfairness" of the investigations so far and "biased" media coverage. Some conservatives have even started calling the impeachment trial a "witch hunt" where the justices have already determined Park guilty of suspicions raised without really checking evidence.

Observers say that Park could invite reporters to her residence for another tea time to deliver a message to the public around the holiday.

Some of her aides raised the possibility that she could attend the final court hearing to outline her case personally and rebut the suspicions raised, though she refused to attend the first court hearing on the impeachment case on Tuesday.

"The president is preparing to defend herself at the impeachment trial," a presidential official told Yonhap on condition of anonymity. 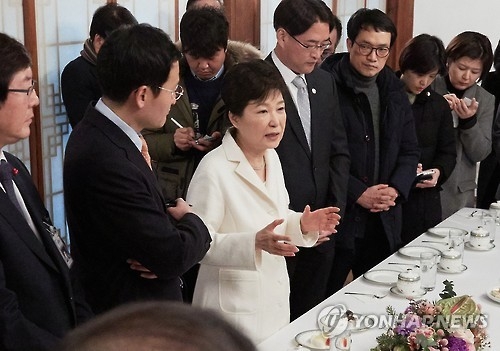