Chung Woo-taik and Bak Maeng-woo, the party's floor leader and secretary-general, respectively, called on In Myung-jin, the interim leader, to determine their fate, lending their support to his campaign to shore up public trust and overhaul the party's image in the wake of a corruption scandal involving Park and her longtime friend.

"Key party officials and the floor leadership have submitted letters asking In to determine their fate," Kim Myung-yeon, the party's spokesman, told reporters.

"Senior party lawmakers, one by one, have been participating in the efforts to overhaul the party as they feel responsible for the party having descended into the current state," he added.

Since In, a Christian pastor, took the helm of the party's emergency panel last month, he has pushed for the removal of staunch loyalists to Park as the key to the party's reform. Loyalists such as Reps. Suh Chung-won and Choi Kyung-hwan have traded barbs with In, refusing to quit the party.

Suh accused In of "illegitimately destroying" the party, calling for his departure and an early leadership election.

Amid the reform spat, Rep. Jeong Kab-yoon, a Park loyalist, bolted from the party Wednesday, saying he would become an independent and continue to support the president, who was impeached on Dec. 9 over a string of corruption allegations.

During a meeting with senior party officials earlier in the day, In indicated that he would continue to push for sweeping party reform that would not only include personnel changes, but also policy shifts. 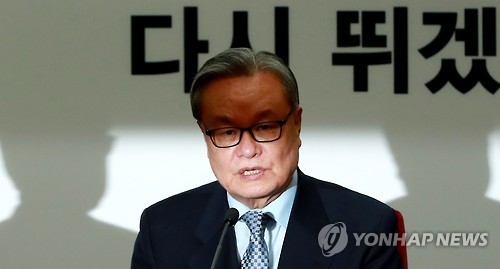 Meanwhile, the party has decided to reorganize its regional chapters to prepare for a presidential election this year and quickly form a committee aimed at strengthening central and regional organizations that have been weakened due to the party's persistent factional feuds.