SEOUL, Jan. 4 (Yonhap) -- South Korean boy band BIGBANG has made it to the Forbes' list of the world's 30 most popular musicians under the age 30 for this year.

The members were the only Koreans on the U.S. economic magazine's "30 Under 30 Music Class of 2017," which was unveiled on the magazine's official website Tuesday (on U.S. local time).

The list includes many of the singers, songwriters, managers and entrepreneurs revolutionizing the modern music business such as the popular American R&B singer Gallant and rapper Logic.

Last year, the Korean act ranked No. 54 on the Forbes' "Celebrity 100" list for earning $44 million last year, which is more than top U.S. all-male groups like Maroon 5.

BIGBANG is scheduled to hold a concert at Gocheok Sky Dome in western Seoul on Saturday and Sunday. 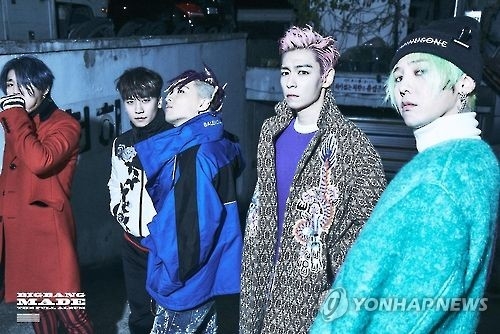