Kosterlitz, a professor of physics at U.S.-based Brown University and currently a visiting scholar in South Korea, made the remarks during an interview with Yonhap News Agency in Seoul.

The 73-year-old scientist shared the prize with fellow British scientists David Thouless and Duncan Haldane in December for their study of "strange states" of matter in the 1970s.

Kosterlitz and his colleagues' work revealed the secrets of exotic matter through advanced mathematical methods, opening the door to an unknown world where matter can assume strange states.

"The research what I did 40 or 42 years ago, it started as a purely theoretical problem," he said. "I worked on problems that just interest me."

The Nobel committee took more than four decades to finally recognize the work that experts say may one day lead to the development of superfast computers.

"The research that leads to the Nobel Prize is 99 percent luck," the humble theorist said, "It takes years and years before the fundamental research into a particular problem is recognized as being important."

The scientist who earned a Ph.D. from Oxford University emphasized that having the funding for researchers in basic science is very important. 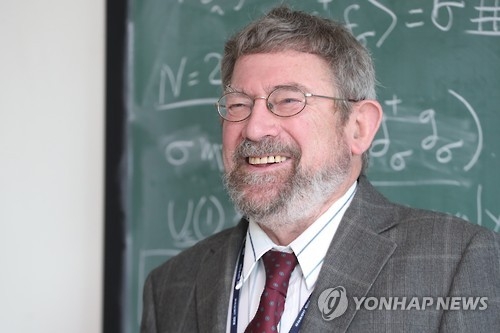 "Because of the funding situation and instability in British universities and the lack of opportunities, we three (three Nobel laureates) went to the United States," he said.

Kostertlitz, who came to the Korea Institute for Advanced Study (KIAS) as a visiting scholar, advised that funding -- whether small or large – should be carried out in a stable manner.

"I have no magic cure but it is important for scientific funding to be stable. Nothing wrong with the increase but a dramatic cut is very damaging," the physicist said.

"I think it is very important that young scientists regularly get funding so that they can carry out research in a stable environment," ICT Minister Choi Yang-hee said during a meeting with Kosterlitz and other young South Korean scientists prior to the interview.

The British professor, who has visited the KIAS frequently in the past 20 years, said he loves coming to South Korea.

"I always love coming here. The research environment is wonderful and most of all, people seem to be happy doing their work," he said.

While the British physicist is thankful for the attention that comes with the Nobel Prize, he still misses life before the limelight.

"I'm still trying to get over this circle," said Kosterlitz, who has been inundated with requests for lectures and interviews.

Kosterlitz, who will go back to the United Sates later in January, said he is still searching for his next problem to solve.

"Physics is full of surprises," he said. 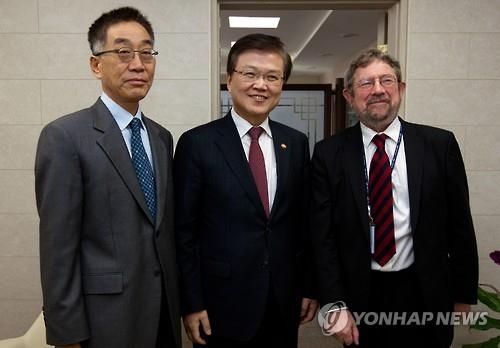