SEOUL, Jan. 4 (Yonhap) -- Moon Jae-in, former head of the Democratic Party, said Wednesday he will seek to have the Constitution revised before the regional election slated for 2018, adding preparation should kick off with the launch of the next administration.

"The revision should be made at the start of the next administration after gathering public opinion," Moon said.

A growing number of politicians are voicing the need to amend the constitution to address excessive powers granted to the president, which is partially blamed for the corruption scandal involving President Park Geun-hye and her confidante.

Moon said along with the revision of the power structure, changes should also seek to improve the election system and grant more authority to provincial administrations.

"He needs to face verification procedures as he stayed overseas for a long time and was not involved in domestic political activities," Moon said, while describing himself as "the leading candidate."

On the group of lawmakers that left the ruling Saenuri Party to establish a conservative party of their own, Moon said they are still responsible for the failure of the Park administration, and are no different from her loyalists. 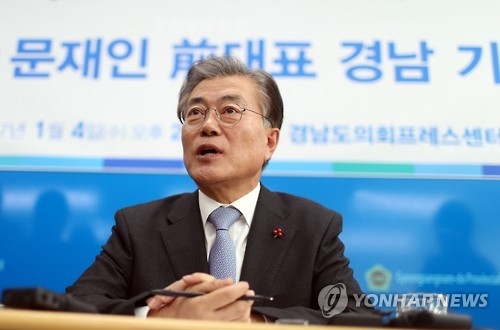