SEOUL, Jan. 4 (Yonhap) -- South Korean mixed martial arts (MMA) fighter Jung Chan-sung said Wednesday he is ready to return to the octagon after more than three years away, though he still feels "a little bit of pressure."

Jung, better known by his nickname "Korean Zombie" for his aggressiveness, will face Dennis Bermudez at the Ultimate Fighting Championship (UFC) Fight Night 104 in Houston, Texas, on Feb. 4.

The bout will be his first since August 2013 when he lost to Jose Aldo for the featherweight title. After suffering his first defeat at the UFC, Jung began his mandatory military service in 2014. He was discharged from duty in October 2016.

"I realized that the popularity of UFC is really high," Jung said at a press conference at his gym in Seoul. "I feel a little pressure because I've never thought that people would pay this much attention to my return."

Jung had only four fights in the UFC, but left his mark before leaving the ring in 2014. He is the first fighter in UFC history to end a bout with a twister submission technique and is the first South Korean to have a title match at the UFC.

Jung said he is confident of proving that he still has the skills to beat other top fighters. 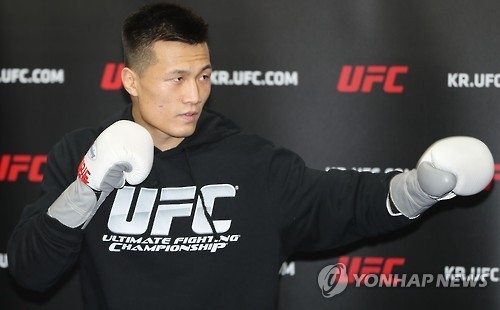 "You'll see in the upcoming bout whether I've still got talent or not," he said. "I know sparring and actual fighting are different, but I hope I can display what I've been preparing for the last three years. If I can do it, I can become the champion."

To prepare for his return, Jung has been training with his former MMA club Korean Top Team and even went to the United States to work on his techniques with former UFC lightweight champion Ben Henderson.

"During my training with Henderson, I learned about a champion's mindset and how a champion should live," he said. "I think there's no need to talk about learning techniques. I'm willing to go to Henderson's camp again after the bout."

Jung said he has given himself enough time to prepare for his return. He originally wanted to face B.J. Penn, but the UFC selected Bermudez, who is currently ranked No. 8 in his weight division.

Bermudez, a 30-year-old Puerto Rican-American fighter, holds an MMA record of 17 wins and five losses, and is also known for his wrestling and ground skills.

"The reason I accepted the UFC's offer is that I thought I could demonstrate my skills well against Bermudez," he said. "I didn't want to damage my reputation by avoiding him."

Jung suffered a dislocated right shoulder during his fight against Aldo in 2013 and went through rehabilitation. He said his shoulder is now back to normal, although he isn't quite as sure about his stamina.

Jung will face Bermudez in the five-round main event.

"I remember the amount of exercises that I did in 2013 ahead of the title bout, and I can't be satisfied unless I train like those days," he said. "But in terms of stamina, I'll probably find out when I fight on the stage." 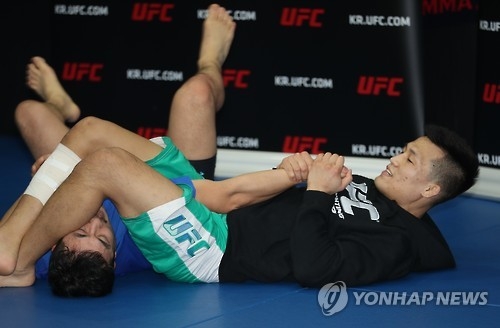 While Jung was waiting for his return, another South Korean featherweight fighter, Choi Doo-ho, made headlines. Choi, who recently lost to Cub Swanson, is currently ranked No. 11.

Jung said Choi's performance has motivated him to work harder.

"I think of Choi as my partner, not a competitor," he said. "I thank him for keeping me motivated. Now, I'm in a position to catch up to Choi."

If he beats Bermudez, Jung said he then wants to face Max Holloway, the current UFC interim featherweight champion, but anyone ranked No. 7 or higher is fine, too.

When asked about his re-match against Aldo, Jung said he wants see the Brazilian fighter in the lightweight division, where Conor McGregor holds the championship belt.

"I'll do my best if I meet Aldo," he said. "But I want to see Aldo go to the lightweight division and beat McGregor. When McGregor was in featherweight, I also wanted to challenge him, but since he is now in lightweight, I have nothing to do against him. I want to remain a featherweight fighter."

Jung, the father of two daughters, said money has become an important thing for his career because he now has to put food on the table.

"If I can beat Bermudez, I can probably get a new contract from the UFC," he said. "Now I have so many things on my shoulder. I'm in the second half of my career, but things are so different than the past. I now have a family that I must take care of."