SEOUL, Jan. 4 (Yonhap) -- Many people would agree with the saying that you are what you eat. But how many of them do actually change their eating habits for the better or give serious thought to where their food has come from?

In her new book "What do you eat for living?," Seonjae, a Buddhist nun, shares her personal story of practicing Buddhism to cultivate her mind and body and overcoming lung cancer through monastic, simple-yet-healthy food.

During a press briefing on Wednesday to mark the book publication, shaven-headed Seonjae in light gray robes said people seem to focus on taste too much, a realization that led her to write her second book in five years.

"Since my first book was published in 2000, I was asked by so many people to write a cookbook. The focus shouldn't be on how to make tasty meals," she said. "This one is aimed at changing people's thoughts on and approach to food in general." 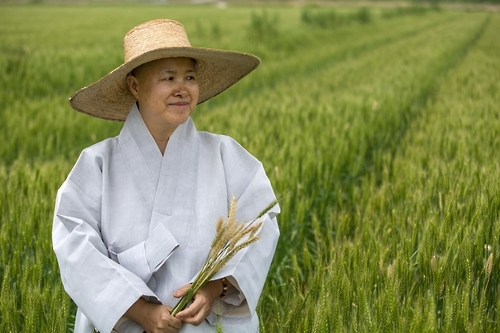 Seonjae, 60, is one of the most renowned experts on Korean temple food. She has dedicated almost three decades in developing recipes, raising public awareness and engaging in a broad campaign to improve people's diet.

Temple food is similar to vegan food, but the difference lies in the fact that "there is a dose of wisdom in Korean temple food," she said, elaborating that eating food while leading a monastic life is not just about satisfying one's hunger and staying healthy but also about achieving awakening through food.

In 1994, she published a thesis on Korean temple food, the first of its kind, piquing people's interest in a more healthy way of eating. She has offered counseling on eating habits especially for parents with picky children and held cooking classes to make monastic food. 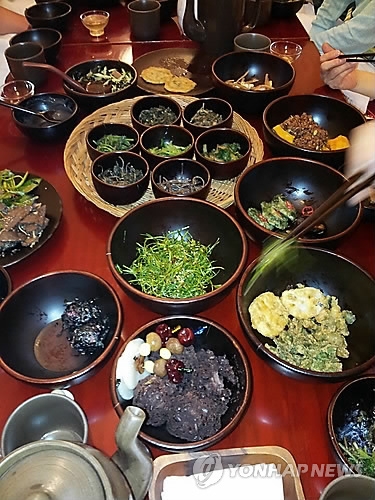 She became even more dedicated to her mission after she overcame lung cancer through food therapy.

"My father and two brothers all passed away because of lung cancer. My doctor told me I had only one year to live. At that time I had to take a break three times to walk for 10 minutes."

Seonjae stopped visiting her doctor who said there was nothing he could do for her. She got back to nature and heavily relied on food to heal herself. She became more careful with her food; she cooked only with home-made ingredients, stopped eating out and followed the Buddhism beliefs such as "All food is medicine," and "Change what you eat according to a season." Eating, after all, is very, if not the most, crucial, part in her lifelong practice of Buddhism.

Her strenuous efforts and dedications have recently been recognized by the Korean Buddhist Jogye Order which designated her as "Temple Food Master." She became the first Buddhism practitioner with the title.

"The real masters are in the mountains right now who cook and eat temple food as a way of practicing Buddhism," she said. "I believe they've bestowed me with this title so that I feel responsibility for carrying on with this mission for the rest of my life."