SEOUL, Jan. 4 (Yonhap) -- South Korea's exports of marine products surpassed the US$2 billion mark last year for the first time in three years due to the growing popularity of tuna and laver abroad, the Ministry of Oceans and Fisheries said Wednesday.

South Korea shipped $2.13 billion worth of fishery goods last year, up 10.6 percent from $1.92 billion a year earlier, the ministry said in a release.

It is the first time since 2013 that the country's fishery products shipments exceeded $2.1 billion. 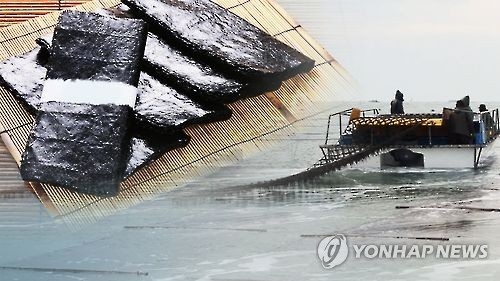 By item, exports of tuna rose 17.6 percent to $353 million last year from a year earlier as demand for raw tuna jumped sharply in the European Union, Japan, Vietnam and Thailand.

Abalone exports increased a whopping 72.4 percent to $66.5 million last year due to a growing demand for abalone in China.

Shipments to China and Thailand also increased 20.5 percent and 28.5 percent each.

"We've achieved 2.1 billion dollars worth of marine goods exports last year despite adverse conditions in the export market," Choi Wan-hyon, a ministry official, said. "We are focusing on such high value-added products as raw fish, fresh refrigerated and processed products this year, although we expect the growing protectionism and strengthening of non-tariff trade barriers."