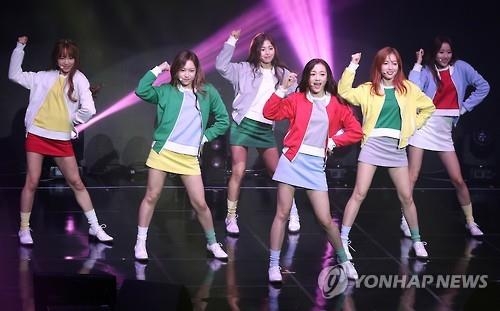 The six-member act, which released its third EP album "Prelude" on Wednesday at 12 a.m., had a press showcase of the album at Olympic Park in eastern Seoul.

The album holds nine songs: five new ones and four rearranged past tracks.

The comeback marks a new beginning for the group which debuted in 2015.

Rachel, who was brought up in the United States, has exceptional ballet skills, according to the team's agency DSP Media.

Back in 2015, April gained attention for the members' remarkably young ages. The average age of the members at their debut was 17.5, the lowest among the then active girl groups.

It's only four days into 2017, but K-pop girl groups are already engaged in a heated competition to rank high on music charts with the back-to-back return of big players.

April's past image, given the girls' young age, was associated with unadulterated pureness and innocence. So what are the girls pitching this time? 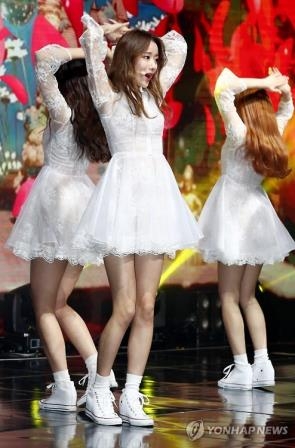 "We've always had distinct concepts in the past, such as the Alps girl, girl scout and Tinkerbell imageries. We're back as dolls having fallen in one-sided love," explained member Chaewon of the group's music video for the new song "Story of the Spring Country."

"As the youngest (active) girl group, we have an edge in terms of (of having more room) for maturing and growing."

The girls believe the new members have contributed to the team's growth.

"In terms of concept and songs, we've included more genres compared to the past. I think we've matured after new members have joined," Naeun said.

But that's not necessarily a bad move, as they're playing safe with their fan base.

Also the album's overall production value is up to snuff and packs quite an amount of content, even if some are repackaged.

New member Chaekyung is confident their new album will be received well by fans old and new.

"When I first listened to the (title) song, I thought 'this is it.' (Given the upcoming Lunar New Year,) if we top the charts I'm thinking of maybe handing out tteokguks (soup made of rice cakes)."