SEOUL, Jan. 4 (Yonhap) -- Former U.N. Secretary-General Ban Ki-moon filed a complaint against a local magazine on Wednesday at a press-arbitration body after it reported that Ban received bribes worth US$230,000.

Officials representing Ban said the complaint was sent to the Press Arbitration Commission, claiming the report made by the Seoul-based weekly magazine Sisa Journal was groundless.

"The report is completely groundless, and we will continue to take strong actions against slanderous reports under the disguise of the verification of (presidential) candidates," Ban's officials said.

Officials said they have no plan to withdraw the complaint, adding the report has defamed Ban as well as South Korea.

While Ban has never expressed his intention to run for the presidency, the former U.N. head has been leading polls among conservative figures as a potential candidate.

According to a survey conducted by Yonhap News Agency and KBS, South Korea's top news wire and broadcaster, respectively, Moon Jae-in, former head of the Democratic Party, posted an approval rating of 21.6 percent, trailed by Ban with 17.2 percent. 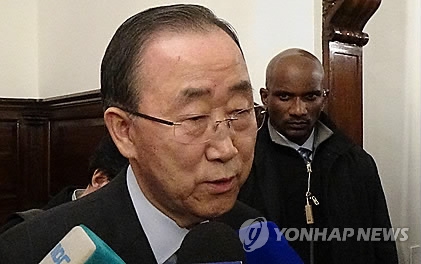