BEIJING, Jan. 5 (Yonhap) -- China's top diplomat called Wednesday for South Korea to halt the planned deployment of the U.S. THAAD missile defense system when he met with a group of South Korean opposition lawmakers, according to the legislators.

Foreign Minister Wang Yi made the appeal, saying China doesn't want relations with South Korea to move backward, but it would be unimaginable for the country to say it wants to expand the relations when Seoul says it intends to accelerate THAAD's deployment, according to the lawmakers.

Wang also said that Chinese leaders are trying to fulfill South Korea's security interests, and he hopes South Korea will also consider the balance in China's security, according to the seven opposition Minjoo Party lawmakers led by Rep. Song Young-gil.

South Korea and the U.S. decided in July to deploy a THAAD battery to cope with missile threats from North Korea.

He also told the lawmakers that China resolutely opposes the North's nuclear program and its nuclear test, and agreed to adopt a U.N. Security Council sanctions resolution, rejecting criticism that China isn't doing its part properly in resolving the issue.

Should the sanctions be implemented earnestly, the North may rethink denuclearization, Wang said. He also said China has been sincerely carrying out the sanctions and will continue to do so, according to the lawmakers. 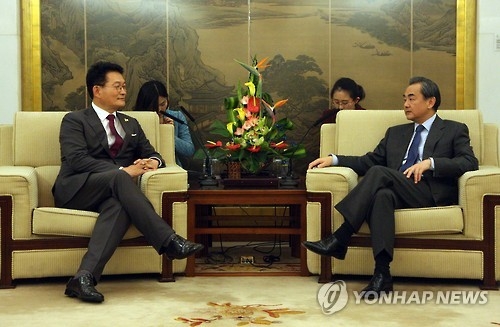