In an interview with Yonhap News Agency, Rep. Joo Seung-yong said the party could change its primary rules and even its name if necessary to draw competent presidential contenders, also including former opposition leader Sohn Hak-kyu and former Prime Minister Chung Un-chan.

"If Ban is found to be a conservative reformist after thorough identity verification, we will recruit Ban to compete intensely with former party chief Ahn Cheol-soo," he said.

Joo said the party hopes to play a key role in uniting the opposition bloc to win the presidential election which is expected to be held earlier than the originally scheduled December.

Joo promised to remove any stumbling blocks to presidential hopefuls in joining the party.

"There will be no reason for them not to join the People's Party if we hold a 100 percent open primary, which excludes party members. We can change the party name if they demand it."

Ban, whose second five-year term at the U.N. ended at the end of December, plans to return to Korea next week.

His potential rival Ahn, former party leader, has been against accepting Ban. Joo, regarded as a representative of the party faction opposing Ahn's group, said Ahn may see his currently slumping approval rating rebound through fierce competition with Ban and other powerful rivals.

Political parties have been seeking to recruit the former U.N. head, who currently leads other conservative candidates in opinion polls though he is slightly behind Moon Jae-in, former head of the main opposition Democratic Party. Ahn is currently hovering around at the lower-end of presidential polls.

The People's Party spun off from the Democratic Party last year after a rift between Ahn and Moon.

The floor leader said the party is also open to joining hands with the defectors from the ruling Saenuri Party, who plan to launch their tentatively-named New Conservative Party for Reform this month.

"(The planned new party) is not that different from us in terms of identity," Joo said, adding it will take a closer look on their stance on key reformative bills proposed by the People's Party.

Joo noted the planned new party and the People's Party hold a strong presence in the country's southeast and southwest, respectively, and thus could help each other.

The whip said the party will continue efforts to rally voter support outside the southwest, as 100,000 of its 180,000 members are from the region.

"We need to eradicate the perception that we are a southwest-based party, or a private party of Ahn," Joo said. 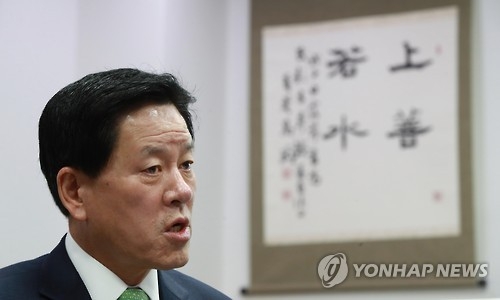