Kim gave what the North calls field guidance to the Pyongyang Bag Factory, which was built in July last year, and produces school and ordinary bags, according to the Korean Central News Agency (KCNA).

"Noting that the factory has all necessary modern equipment made with indigenous efforts and technology ... he stressed it is a great success that more than 95 percent of the machines operating at the factory are homemade," the KCNA said.

Kim is seen as having chosen the bag factory as his first inspection in the new year to show his caring to ordinary people and to stress the need to focus on self-reliance in the face of tougher international sanctions.

Kim said in his New Year's Day message that there is a need to actively push for attaining the goal of a five-year strategy for economic growth "by dint of the self-reliance and self-development."

At a party congress held in May 2016, Kim presented the five-year strategy for economic growth, stressing the need to improve the people's livelihoods and ease an electric power shortage. But his vision largely lacked details and specific targets.

Last year, Kim carried out the fewest public activities since he took office in late 2011 amid toughened international scrutiny over Pyongyang's nuclear and missile tests, according to data by Seoul's unification ministry. 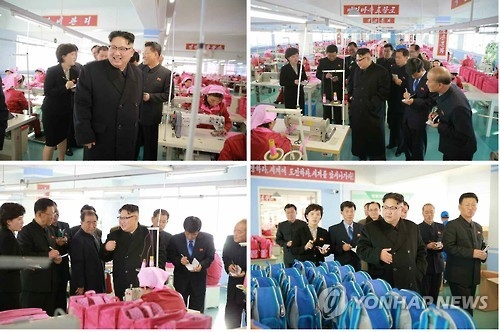