SEOUL, Jan. 5 (Yonhap) -- South Korea's official inflation last year may be 1 percent, but the price hike felt by consumers is more like 10 percent because of markups in widely sought products, an independent survey showed Thursday.

Comparisons drawn through retailers, manufacturers and the Korea Consumer Agency (KCA) indicated that while some of the products were publicized in the price raise, others were not.

KCA's price survey at giant supermarkets, department stores and traditional markets from June to December last year showed that the price of dried noodles from Cheiljemyunso, a brand of CJ Foodville, rose 26.2 percent during the period.

The prices of other popular products, including cereal, dried sea laver, cooking oil, instant soup and frying powder, rose well over 10 percent, the survey showed. The price of one particular brand of cereal jumped 20 percent.

Popsicles were marked up between 11.6 percent and 12.7 percent, and inflation also affected multiple other food products, such as instant rice and snacks.

Daily necessities also became more expensive, according to the survey. A AA-sized Duracell battery went up 13.6 percent. A brand of paper towels was up 20 percent. 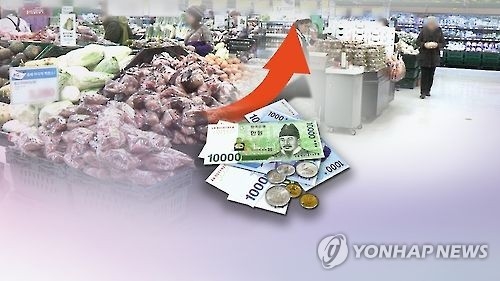 Some manufacturers have announced the price hikes. Nongshim's products, mostly instant noodles, were raised by an average 5.5 percent on Nov. 20. On Nov. 1, Oriental Brewery Co. raised its beer product prices by an average 6 percent.

Sodas like Coca Cola and Fanta were also marked up by 5 percent in November. Confectionery chain Paris Baguette pushed up the price of its baked goods by about 6.6 percent.

"Price hikes are occurring like dominoes during the year-end and new year periods, and are veiled by the current disarray in state affairs," said Kim Yeon-hwa, head of the cost analysis team at the Korea National Council of Consumer Organizations. "Inflation is likely to become an urgent crisis in 2017."

Kim criticized some of the manufacturers for their unethical business tactics, accusing them of raising their product prices without having to do so, unlike others who are forced to do so from the raw material becoming more expensive.

"The government needs to monitor the inflation trend and verify whether the price hikes are reasonable, engaging in a policy that best limits daily necessities from price surges," Kim said.
(END)