SEOUL, Jan. 5 (Yonhap) -- Rep. Yoo Seong-min, a presidential hopeful from the proposed New Conservative Party for Reform, condemned the visit by opposition lawmakers to China on Thursday, stressing that talks with Beijing on the deployment of an advanced U.S. missile defense system is tantamount to "betrayal."

A group of opposition lawmakers, who have opposed the deployment of the Terminal High Altitude Area Defense (THAAD) system in the country, earlier visited Beijing to exchange views on the latest tension between the two countries.

While the government insists the battery is vital to improve defense capability against North Korea, opposition parties have been protesting the move, claiming an increased presence of the U.S. military will make China uncomfortable.

"The THAAD system is needed to protect the lives of our people. It is related to the sovereignty of South Korea," Yoo said.

Yoo said the sovereignty of defense and the people cannot be negotiated with any country, calling opposition lawmakers' visit "shameful."

"If we take such a step, China will continue to infringe upon our sovereignty in other cases," Yoo said, adding Beijing is currently trying to pit South Koreans against each other.

The tentatively named conservative party, formed from a group of lawmakers that bolted from the ruling Saenuri Party following a factional feud. It is expected to officially launch later this month. 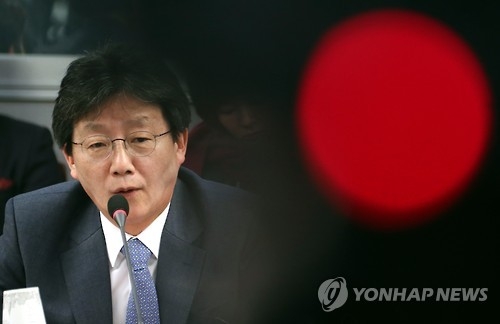