SEJONG, Jan. 5 (Yonhap) -- The new U.S. government will likely designate South Korea as a currency manipulator after putting China on its list in the first half of this year, a report said Thursday.

"In order to name China as a currency manipulating country, the U.S. has to ease the current standards or lay down new rules," said the report released by the state-run Korea Institute for International Economic Policy (KIEP). "Should it happen, it is highly likely that South Korea will be designated as a currency manipulator."

U.S. President-elect Donald Trump has insisted that the Beijing government is wielding influence on the currency market, warning that his government will label the country as a currency manipulator and restrict Chinese imports.

But Trump's pledge was not wide of the mark, given the U.S. government's foreign exchange policy.

In April last year, the U.S. Treasury Department put five countries, including China and South Korea, on its monitoring list, citing that the countries have a significant bilateral trade surplus with the United States and are suspected of having intervened to resist depreciation of the local currency.

None of them, however, met three criteria to become a currency manipulator.

The KIEP report predicted that the Trump administration will take action in the first half in accordance with his motto of "America first."

"If China is labeled as a manipulator, intensifying Washington-Beijing tensions and widespreading protectionism will drag down global trade and spark dispute over foreign exchange and trade across the world," it said. "Such global turmoil would spread to the South Korean economy."

The report noted that the Seoul government should monitor any movements in the U.S. government and strengthen risk management efforts to deal with rising uncertainties stemming from possible U.S.-China conflict.

The South Korean government said it will make more efforts to prevent the U.S. from grouping the country into the currency manipulating list along with China.

"We will do our best to avoid it," said Song In-chang, deputy finance minister for international affairs. "We will contact officials and personnel linked with the Trump administration to explain our logic and grounds." 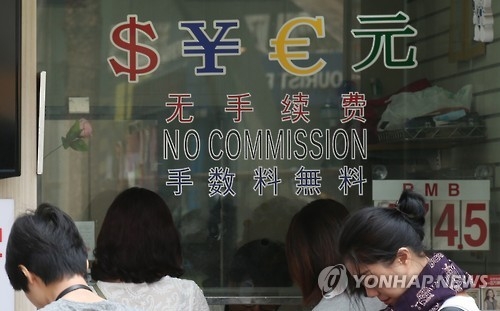 U.S. likely to designate S. Korea as currency manipulator along with China: report

U.S. likely to designate S. Korea as currency manipulator along with China: report