SEOUL, Jan. 5 (Yonhap) -- An aide to South Korean President Park Geun-hye was grilled at the Constitutional Court Thursday over the details of an alleged corruption scandal that led to Park's impeachment.

Yoon Jeon-chu, a former fitness trainer who now works at the presidential office, was called in to testify during the second formal hearing in Park's impeachment trial. Park and three other witnesses failed to show up.

Yoon is suspected of working as a personal assistant for Park's confidante Choi Soon-sil, who, despite having no government post, allegedly abused her ties to the president to gain personal and business favors.

She denied knowledge of much of the details of the corruption allegations, but admitted to seeing Choi at Park's official residence. 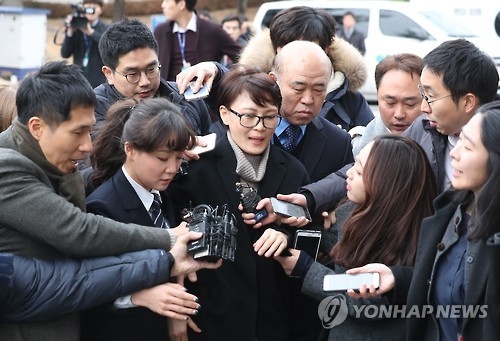 "I don't remember exactly how many times, but I did see her," she said in response to a question from the National Assembly's impeachment panel. "I don't think it was often."

Choi, among other things, is suspected of entering the presidential office Cheong Wa Dae without security checks and involving herself deeply in state affairs since the start of Park's term in early 2013.

The National Assembly impeached Park on Dec. 9 over her suspected involvement in Choi's suspected crimes. State prosecutors have named Park an accomplice in Choi's indictment.

Yoon said she and Choi worked together on Park's wardrobe but refused to give details. She also testified to meeting Park on the day of a deadly ferry sinking in April 2014 but claimed she had no recollection of what exactly they did.

The ferry sinking is at the center of the impeachment trial because critics argue more lives could have been saved had Park properly responded to the disaster. More than 300 people, mostly high school students, were killed in the sinking.

Park's presidential powers have been suspended pending a court decision. She has insisted on her innocence, saying the allegations against her are not based on facts but hearsay.

Choi too has contested the corruption charges leveled against her.

Rep. Kwon Seong-dong, chairman of the parliamentary legislation and judiciary committee, called on the justices to remove Park from office, saying her actions amounted to a violation of the Constitution and the law.

He especially cited allegations that the president gave confidential documents to Choi and extorted large sums of money from conglomerates with the aim of benefiting Choi.

Park's attorneys rebutted the accusations, citing a lack of evidence and legal basis.

The president was also absent from the court's first formal hearing on Tuesday. But the law does not require her attendance, and her lawyers have said she will likely remain absent from the proceedings.