A bipartisan parliamentary committee on the amendment held its first meeting, electing Rep. Lee Ju-young of the ruling Saenuri Party to chair the 36-member panel.

"The Constitution was last revised in 1987 reflecting the people's aspiration for democracy," Lee said during the meeting. "While it played a key role in improving people's rights and demolishing authoritarianism, it no longer suits us as politics, the economy and society have changed over the past 30 years at home and abroad."

The committee will review different proposals to change the current single, five-year presidency, including a four-year, two-term presidential system, a parliamentary government system, and a division of powers between the president and parliament-appointed prime minister.

Another key issue is the timing of the revision. Politicians are divided over whether it should happen before or after the next presidential election, which may take place earlier than expected amid the impeachment of Park. The next election is currently scheduled for December.

Lee said he will make efforts to revise the Constitution before the election. If the revision is not complete before the vote, it is likely to emerge as a key campaign agenda.

The ruling and opposition parties were divided over the scope of the constitutional revision.

"We need to focus on a limited area, as it would be hard to come up with a conclusion if we seek to solve everything," Rep. Ahn Sang-soo of Saenuri said. "The discussion should concentrate on the power structure and try to arrange it so the next major election will be under the new Constitution."

Rep. Lee In-young of the main opposition, however, said the committee should seek a comprehensive discussion that includes unification and other social issues.

The Justice Party also said the revision needs to review all the mistakes that have occurred in the past 30 years.

The committee plans to hold a public hearing on Jan. 19 at the National Assembly to gather more input from society. 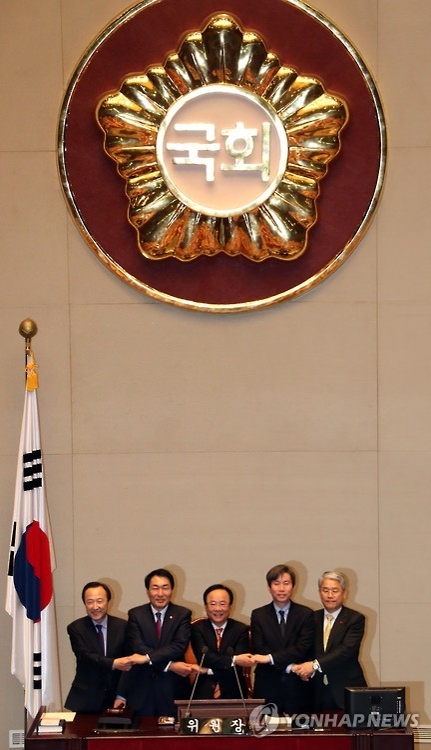