SEOUL, Jan. 5 (Yonhap) -- The prices of computer memory chips are expected to jump about 30 percent in the first quarter of the year, according to industry data on Thursday, providing a boon to South Korean chipmakers, such as Samsung Electronics Co. and SK hynix Inc.

According to market tracker DRAMeXchange and industry sources, the contract price of the benchmark 4-gigabit DDR3 recently surpassed US$25, up 39 percent from an average contract price in November last year.

DRAMeXchange expected an average contract price of DRAM chips for personal computers to jump 30 percent in the first quarter of this year.

Analysts have predicted that the prices of DRAM chips remain firm as chipmakers reduced DRAM output as they shifted their production lines to expand production of mobile DRAM for smartphones and other mobile devices.

Samsung accounted for half of the global DRAM market, while SK hynix held about 25 percent of the market.

Samsung, which is scheduled to release its guidance for earnings for the fourth quarter of last year, is said to post about 4.5 trillion won (US$3.7 billion) in fourth-quarter operating profit from its semiconductor business.

Brokerage firms predicted that SK hynix may post an operating profit of between 1.2 trillion won and 1.38 trillion won for the fourth quarter of last year. 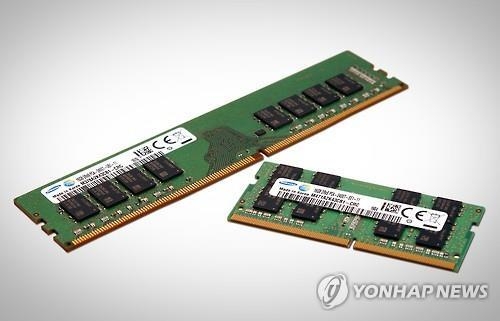