During the New Year's policy briefing on economic affairs, Hwang called for "creativity" in finding new business opportunities to revitalize the economy, which has been facing weak exports and flaccid domestic consumption. South Korea has been struggling with the fallout from the restructuring of major industries and uncertainties from U.S. interest hikes and Britain's vote to leave the European Union.

"With the government putting job creation at the center of state affairs, we will have to actively help local firms create jobs through budgetary and taxation support, and draw up measures for young adults and woman, who are having difficulty landing jobs," he said. 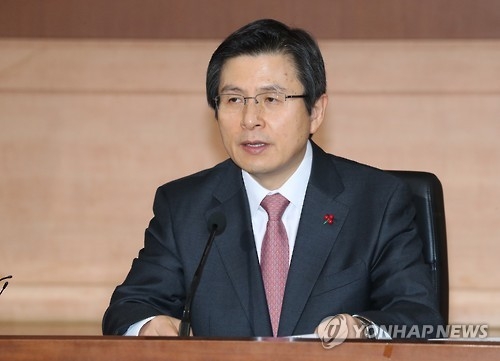 "As forging favorable conditions for investors through regulatory reform is a shortcut to expanding jobs, the government has to carry out a review of existing regulations and take bold steps to improve them," he added.

Hwang took over as acting president on Dec. 9 after the National Assembly voted to impeach President Park Geun-hye over a highly charged corruption scandal.

He directed policymakers to find ways to "innovate" export routes by creating new mainstay products and encouraging the use of electronic business transactions.

"We have to strengthen our efforts to respond to uncertainties in the world economy by establishing mutually beneficial economic and trade relations with the incoming U.S. government and through multilateral forums such as the Group of 20 (leading economies) and APEC (Asia-Pacific Economic Cooperation)," he said.

He also stressed the need for thorough measures to manage internal economic risk factors such as swelling household debts and underperforming businesses.

Earlier in the day, Hwang encouraged ministers and chiefs of public organizations to visit local traditional markets as part of efforts to boost consumption ahead of the four-day Lunar New Year's holiday that begins on Jan. 27.

During a regular meeting of top officials on state affairs, he called on the government to strive harder to spur economic recovery and stabilize the livelihoods of average citizens.

The government decided to craft and implement a set of measures to stabilize prices of agricultural, fishery and livestock products, promote consumer spending at traditional markets and offer support for low-income families in time for the important traditional holiday.

On the diplomatic front, top officials shared the need to actively communicate with the incoming U.S. government to ensure that the two countries can continue to maintain close cooperation on a range of pending diplomatic and economic issues.

Touching on the recent outbreak of Creutzfeldt-Jakob disease, a degenerative neurological disorder, Hwang instructed the government to ensure that false information about the disease does not spread online and trigger unnecessary public fear.