Park Sam-ho and Kim Byung-ho, both in their late 50s, come with more than 40 years of experience, which the company said will help in weathering the current global slump in the industry by improving productivity and competitiveness. Officials said the promotions also fall in line with the company founder's principle of on-site management.

Park joined the company in 1975 at the age of 18 after graduating from a vocational school and worked in different sections of the production line. In 2015, he was named to a management position where he showed his ability to lead an organization, the company said. His responsibility is overseeing the core process of assembling cut steel sheets into blocks.

"I will focus on quality improvement based on my skills and know-how gained from the work site," he said.

Kim started working at the company the same year as Park right after graduating from a technical high school. He focused his career on building and installing offshore facilities, including overseas projects. He began studying again for a university degree and graduated from Ulsan College in 2000. He was put in charge of overall offshore construction work.

"I will do my best to become a role model for junior production workers and provide support through active communication with production departments," he said.

The company has been promoting assembly line employees to higher responsibilities after its first appointment of a high school graduate to an executive-level position in 2015. 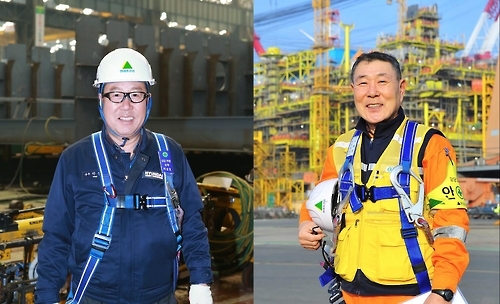