During a special presentation at the ongoing Consumer Electronics Show in Las Vegas, Chung said the company's new cars in the future will be described by three key words -- clean, free and connected. 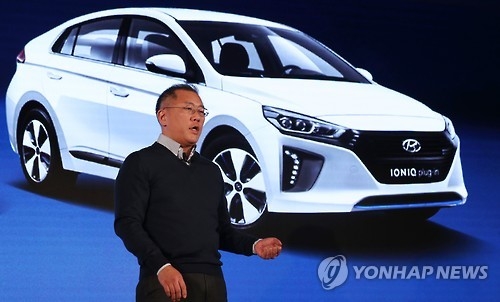 Clean mobility, according to Chung, refers to environmentally friendly cars, such as electric vehicles and plug-in hybrids.

Shortly before the start of the annual trade fair here this week, Hyundai Motor introduced its fully autonomous version of the Ioniq hybrid car.

Connectivity will help ensure safe operation of self-driving cars, but it will also allow easier and more convenient use of cars, he said.
(END)