SEOUL, Jan. 5 (Yonhap) -- South Korea's ruling Saenuri Party continued to suffer from an internal feud, as a newly named interim head demanded key loyalists of President Park Geun-hye leave by the end of this week, while an eight-term lawmaker refused to respond to the request.

In Myung-jin, the interim leader, requested loyalists leave so as to pave the ways for a full-fledged reform, after Park was impeached by the parliament in December over corruption. The radical move, however, has run into a wall in the form of Rep. Suh Chung-won, one of longest-serving lawmakers in parliament and a key loyalist.

The tension deepened Wednesday after Suh called the interim head, who also served as a priest, as a "false clergyman," "liar" and "dictator."

Responding to the remarks, In said Saenuri is like a "church with Suh as a deacon," expressing discomfort over Suh's attack. Sources said In will focus on removing key loyalists, including Rep. Choi Kyoung-hwan and Rep. Yoon Sang-hyun, while keeping other pro-Park members.

Rep. Chung Woo-taik, the party whip who recruited In as the interim head, on Thursday expressed "regret" for members who "cling to privileges," apparently siding with In and asking Suh to resign his party membership.

"Clerics are meant to save lives. (In) is the only cleric that forces death," Suh told reporters. "(In) has disrespected me too much. He shouldn't be calling me a malignant tumor."

The lawmaker said Saenuri made a "wrong" decision to invite In to the party. 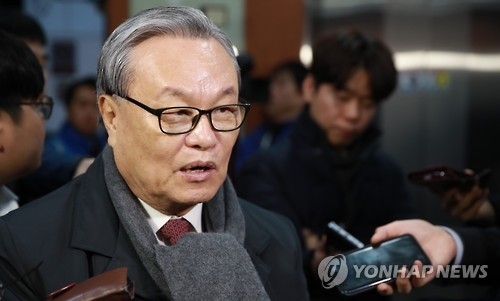