The six-member act held a media showcase Wednesday at Olympic Park in eastern Seoul for its third and latest EP "Prelude," where the members proudly explained the lead song's three key moves in detail and performed them, according to DSP Media.

"April Story" portrays a new image of the group as the members took a step from pure, innocent youths to mature and classy young ladies. The song's choreography is reminiscent of ballet movements wherein Rachel, who has won various awards for her seven-year ballet career, flaunts her skills on stage.

The highly anticipated album is composed of nine songs that mostly deal with typical teenage drama queen material, exploring fears of approaching one's crush only to be refused and crestfallen.

The group, initially five members, debuted in 2015 with the EP "Dreaming." The group had gained attention for the members' remarkably young ages, wherein the average age at their debut was 17.5. Currently, the members are Chaekyung, Chaewon, Naeun, Yena, Rachel and Jinsol. 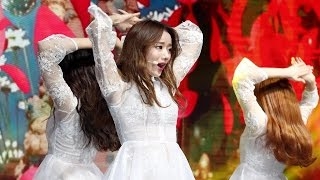