SEOUL, Jan. 5 (Yonhap) -- South Korean opposition parties' bid to lower the minimum voting age before the next presidential election faces hurdles as a planned conservative splinter party on Thursday withdrew its support for the proposal.

The opposition bloc, led by the Democratic Party, seeks to revise the election law to reduce the age limit by a year to 18, a move that polls indicate would benefit liberals who are relatively popular among young people.

The steering committee for the New Conservative Party for Reform expressed its support for the change Wednesday after a meeting to prepare for the new party's inception slated for late January.

But the group with 30 lawmakers abruptly changed its mind the following day in the face of protests from party ranks who did not attend the meeting.

"We will make a decision on the issue after further discussion," said Choung Byoung-guk, committee chairman, on Thursday.

The new party's support is vital for the revision, which requires at least 200 lawmakers to be proposed for a vote in the 300-member National Assembly.

The opposition parties fall short of that requirement with the Democratic Party, People's Party and Justice Party holding only 121, 38 and six seats, respectively. The conservative ruling Saenuri Party pronounced its opposition to the revision.

If the age change is implemented, it would increase the number of eligible voters by some 610,000, which could play a decisive role in an expected tight election.

Moon Jae-in, former head of the Democratic Party and now its leading presidential hopeful, said 18-year-olds should be allowed to vote as they are obligated to serve in the military and pay taxes.

"While our youth's political awareness is the highest in the world, their rights are in the lowest level in the Organization of Economic Cooperation and Development (OECD). It is shameful and regrettable," he said.

South Koreans are sharply divided over the issue. In a survey released by Real Meter on Thursday, 46 percent of respondents supported the amendment while 48.1 percent are against.

By political stance, only 18.2 percent of those who identified as conservative supported it, while the comparable figures were 67.8 percent and 55 percent among progressive and centrist respondents, respectively.

The poll was conducted on 504 South Koreans on Wednesday with a margin of error of plus or minus 4.4 percentage points. 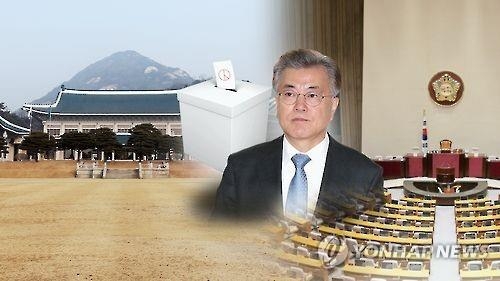