A total of 1,185, including 29 lawmakers and two provincial governors, signed up for the nascent party formed by defectors from the conservative ruling Saenuri Party.

The reform-minded conservatives pronounced that they will pursue a "clean and warm conservatism."

"We are taking the first step to become the pivotal point of reformist conservatives under the banner of 'clean and warm conservatism' reflecting the people's wish to protect liberal democracy, uphold the principle of market economics, and realize social integration and a caring community," the group said in a statement.

Elements of direct democracy, including voter recall of lawmakers and referendum on individual policies, will make up the trunk of its political reform.

It also promised to guarantee the prime minister and ministers would exert authority to government appointment, and broaden the scope of disclosure of government information. It will also transfer key authorities of the Board of Audit and Inspection to parliament.

On the social front, the party said it will restrict the construction of additional nuclear power plants and will eradicate workplace discriminations against temporary workers.

On the inter-Korean ties, the group committed to respect previous agreements with the North, including two summit declarations made by liberal presidents in 2000 and 2007, which they used to sharply criticize while affiliated with the Saenuri Party. But they also pledged to sternly deal with the North's nuclear and missile provocations, and make efforts to improve human rights conditions in the communist country.

They are currently working on finalizing the party's name. Some claim the title should include "conservative," while others insist its name should sound neutral to embrace a wider scope of supporters.

The new party's members spun off from Saenuri after colliding with loyalists to President Park Geun-hye, who was impeached in December over an immense influence-peddling scandal involving her confidante Choi Soon-sil.

The party will open its headquarters in Yeouido, where the National Assembly is located.

"We now bid farewell to a group based on standpattism and anachronism," said Rep. Choung Byoung-guk, who was elected to chair the preparatory committee, apparently referring to Saenuri. "We will demolish an outdated order and make a new political order together with the people."

Rep. Yoo Seong-min, who is cited as a potential presidential contender, said the party will abide by the Constitution, while thoroughly protecting national security.

Gov. Nam Kyung-pil of Gyeonggi Province said the new party should also reach out to liberal and progressive voters and that it should stand at the center of national security.

Rep. Kim Moo-sung, former head of Saenuri, said he will not take any posts in the new party and will devote himself to creating a new conservative administration. 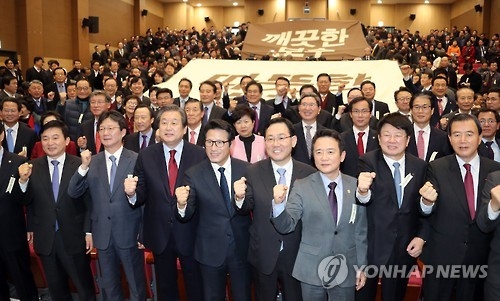