After spending his first 11 Korea Baseball Organization (KBO) seasons with the Samsung Lions, Cha Woo-chan signed a four-year, 9.5 billion-won (US$7.9 million) free agent contract with the LG Twins last month. It was the largest deal handed to a pitcher in the league history.

In the Twins' first meeting of the year at Jamsil Stadium in Seoul, Cha said he'd like nothing more than to go up against the Lions in his first start of the new season.

"I'd absolutely love to pitch in that home opener," Cha said. "I don't think it will put any pressure on me to face Samsung. I might as well get that out of the way early. It's going to be fun."

Cha's manager, Yang Sang-moon, wasn't nearly as enthusiastic about starting the left-hander in the fourth game of the season. The manager said he has been thinking hard about his rotation since December.

Cha has split his career in the rotation and the bullpen -- it's that versatility that made him a hot commodity in the open market -- but the Twins plan to use him as a full-time starter. 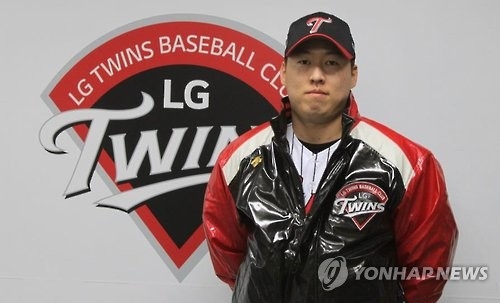 Cha said he doesn't like to draw attention but understands he won't have much of a choice any more, now that he will have to try to live up to his mammoth contract.

"I am actually a little embarrassed to be the highest-paid pitcher, because I know I got more money than I deserved based on my track record," he said. "My name is above a lot of good pitchers. Whether I do well or not, a lot of eyes will be on me this season, and it's something I have to overcome."

Cha also denied rumors of friction with the Lions' management and said it hurt his feelings when people called him a traitor for leaving the only club that he'd known in his professional career.

"My goal is to make at least 30 starts and pitch six innings or more in each start," he said. "If I can do that, I think both the team record and personal stats will follow."