At the first meeting of the new year with his Seoul-based Korea Baseball Organization (KBO) club, LG Twins, Ryu said his ailing shoulder will likely keep him off the national team.

"I just don't think I am physically ready," he said. "I could perhaps force myself to pitch. But as important as it is to play for the country, you have to think about your club and your own health. It could lead to a bad situation for myself, my team and the country."

The South Korean team has been decimated by injuries to its pitching staff, which was already thin from the beginning. Most recently, manager Kim In-sik cut left-handed starter Kim Kwang-hyun Wednesday, a day before he was to have an elbow operation that will sideline him for up to 10 months.

Kim In-sik mentioned Ryu, who once pitched for the Chicago Cubs and the Tampa Bay Rays, as a possible replacement, though the manager was also worried about Ryu's health. 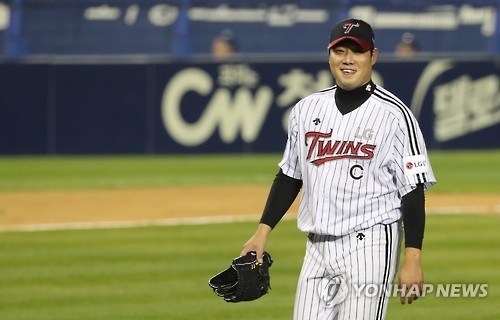 The pitcher said his shoulder has been hurting since the postseason last fall.

"I've been going through a rehab of sort, and it's almost finished," he said. "I am going to resume throwing in the United States this week."

Ryu, 33, returned to the KBO ahead of the 2013 season and has been a solid, if not spectacular, starter for the Twins since. And the club saw two different versions of Ryu last year.

The 13 wins total was his KBO career-high, and Ryu said he wants to do even better in 2017.

"Those 13 wins were nice, but there were a few other games that I should have won," he said. "I think I'll be able to reach 15 wins if I can get myself together."

With the acquisition of All-Star pitcher Cha Woo-chan via free agency, the Twins should make another postseason, Ryu said.

They fell short of making the championship Korean Series, losing to the NC Dinos in the second round series. The Twins' Seoul rivals, Doosan Bears, went on to sweep the Dinos in the Korean Series for their second straight title.

"If we'd reached the Korean Series, I think we would have made it more interesting," Ryu said of the lopsided affair. "This year, I think we may be the only team that could push the Bears."

Ex-big league pitcher rules himself out of World Baseball Classic

Ex-big league pitcher rules himself out of World Baseball Classic