The net asset value of local ETFs amounted to 25.1 trillion won in 2016, up 16.1 percent from a year earlier. Sixty-six new products were introduced during the year, pushing up the total number to 256.

The daily average turnover jumped 13.5 percent on-year to 790 billion won at the end of last year.

Based on that performance, the ETF market is expected to evolve into a "comprehensive asset management market" and play a role as a major investment vehicle, the KRX said.

It added that the net asset value of ETFs here is projected to grow to around 30 trillion won this year. 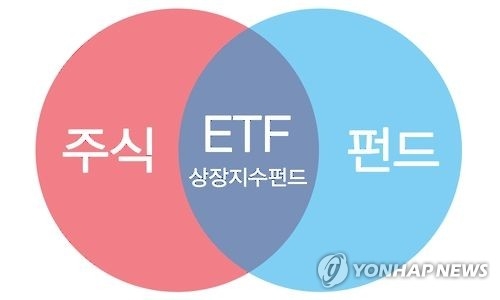 An ETF refers to an investment fund traded on stock exchanges and represents a basket of stocks that reflects an index, or commodities and bonds. It provides retail investors and institutions with a more liquid and risk-hedging tool.

The average daily trading volume on the nation's bond market hit a record high of 13 trillion won in 2016 on increased appetite for risk-off assets, the KRX said.

It marks growth of 83 percent from the previous year and the third consecutive year of an on-year rise.

The KRX said it will continue efforts this year for the stable management of the market and improvement of the trading system.