Incheon, which finished 10th among 12 teams in the top-flight K League Classic in 2016, said the 24-year-old attacker has completed a medical and will join the team on Friday. The club, however, didn't disclose further details of Weslley's contract.

"Since Weslley is a player who already knows the South Korean league, we expect him to boost our attack immediately," the club said in a release. "He is a versatile attacker who can play on either wings or up front."

Weslley made his K League debut with the Jeonnam Dragons in 2011. He then played for Gangwon FC in 2012 before returning to Jeonnam the following year. In 2015, he played for Busan IPark.

Weslley, who is known for his explosive speed and dribble skills, joined Thai club Buriram United last year but was loaned out to Japanese outfit Shonan Bellamre in the summer.

"I'm happy to be back in the K League," Weslley said through Incheon's press release. "I know Incheon are a hard-working team with grit. I will try to mingle with my teammates to help this team." 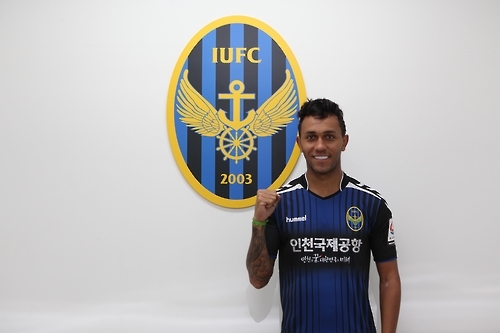