SEOUL, Jan. 6 (Yonhap) -- A group of scientists has developed a stretchable transistor, a science laboratory said Friday, a discovery that could lead to the development of wearable technologies such as bendable electronic devices or artificial electronic skin.

Zhenan Bao at Stanford University and researchers at the Advanced Institute of Technology under Samsung Electronics Co. have co-developed stretchable yet durable electronic transistors that can be easily interfaced with soft moving objects.

There have been numerous studies in stretchable electronics so far but they have not successfully addressed mechanical resilience, since current electronic transistors are typically made of stiff materials. 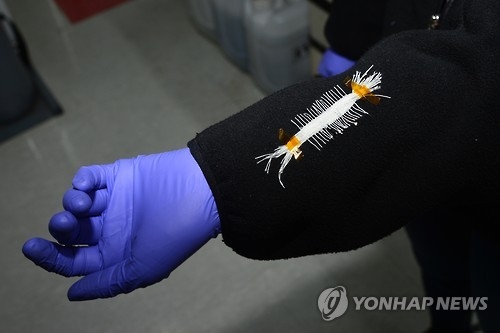 The new findings allow transistors to stretch up to two times, officials said, adding that the discoveries may one day be used in wearable electronic devices such as smart watches or even implantable technology.

"Transistors are stretchable like skin but usually lose their semiconductor characteristics when stretched," said Cheong Jong-won, adding that the goal of the research was to develop a transistor that stretches without discomfort yet has the performance of a semiconductor.

Their findings were published in the science journal "Science."