SEOUL, Jan. 5 (Yonhap) -- Even before visiting a gallery or logging onto the Internet to see their work, one's interest is probably piqued to the highest because of the name. Young-hae Chang Heavy Industries (YHCHI) neither builds ships nor makes construction equipment.

Their work has nothing to do with heavy industries. In a press briefing Thursday, director Kim Sun-jung quoted Chang as saying "We've decided to use HI (heavy industries) for Voge because Koreans love big companies and Marc didn't mind being objectified or capitalized." The duo didn't attend the briefing. 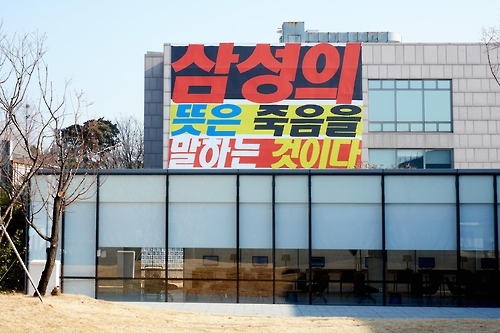 As it turns out, their work is as interesting and refreshing as their name.

To bank on rapidly developing Internet technology in the late 90s and maximize work efficiency, the group adopted web art which "allowed us to create something at a low cost and get rid of a physical place to store art work."

In the three-story exhibition hall, three pieces of digital art -- "All Unhappy Families Are Alike," "Samsung Means to Die" and "Politicians Who Dye Their Hair -- What Are They Hiding?" -- are on view.

Animated text rapidly flashes on the minimalist template to a musical score that the artists made themselves. The flickering text with music effects help viewers picture a story as if playing a movie in their heads. Unusual visual images of electronic literature accompanied with a strong percussion sound are powerful enough to freeze views on the spot.

"The exhibition pierces through YHCHI's consistent themes like capitalism and politics. It looks at a slice of Korean society and exposes its irrationalities in a humorous and biting manner," said the director who curated the exhibit. 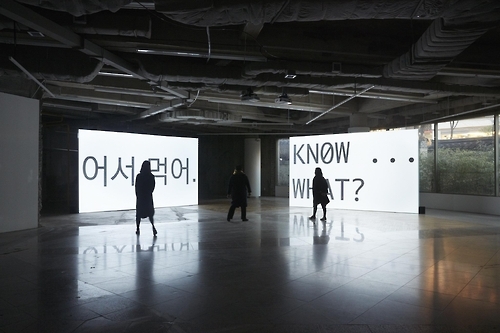 "Samsung Means to Die" is a sequel to "Samsung Means to Come," one of the group's first takes on South Korea's biggest conglomerate in 1999. In the bizarre story, a housewife is captivated by a fantasy in her own kitchen filled with Samsung appliances. There, she experiences an orgasm while daydreaming about the electronic giant. Their latest satire on the all-too-powerful company succinctly and humorously demonstrates the influence Samsung exerts on South Korean life.

Asked if they get any complaint or pressure from the company for the biting work, Chang, in apparent sarcasm, was quoted as saying: "I think Samsung should feel proud of our work in which Samsung is depicted as taking our hand from birth to death."

The group has been more actively exhibiting overseas than in Korea. Their work has been shown at global art institutions such as Pompidou Centre in Paris, Whitney Museum of American Art in New York, Tate in London, and the Getty Center in Los Angeles. In 2012, they were chosen as creative arts fellows at the Rockefeller Foundation Bellagio Center.

The exhibition runs through March 12. 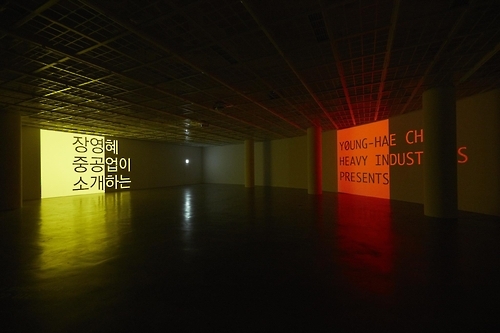