During the New Year's greeting session with local construction business leaders, Hwang said that the government will make all-out efforts to help them make inroads into foreign infrastructure markets through financial and other support.

The acting president, in particular, said that the government will capitalize on the "Korea Infrastructure Investment Platform" (KIIP) to seek investment opportunities through large-scale joint construction projects.

The KIIP is a consultative body among pension funds, banks and insurance companies which is designed to bolster investment in new infrastructure projects.

"(The government) will concentrate its energy on helping local firms expand their presence in overseas construction markets so that we can see tangible results," Hwang said.

He added that the government will create a task force consisting of officials from the government and financial institutions and civilian experts to offer "systematic" support to construction firms.

The acting president, in addition, vowed to expand state financial assistance to the companies by creating a special fund for the enterprises engaging in global infrastructure projects and through other support measures.

"If companies clinch more overseas infrastructure construction deals, this will have a very significant effect on economic revitalization and will also contribute to creating more jobs and overseas employment opportunities for local job seekers," the top official said. 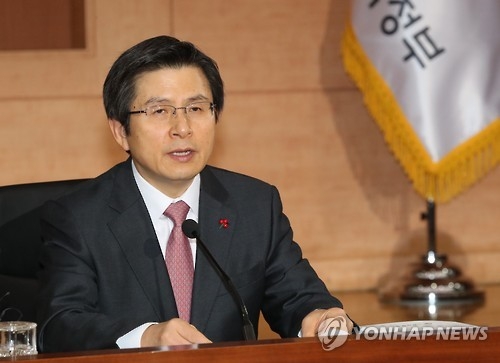