SEJONG, Jan. 6 (Yonhap) -- The South Korean government is working on plans to deal with China's recent hostile actions against the Korean Wave and businesses in apparent retaliation for welcoming a U.S.-owned missile system, the finance minister said Friday.

"We see that such security issues are behind the recent movements by China. There seem to be some China-style responses," Finance Minister Yoo Il-ho told reporters at a press briefing in the administrative capital. "Related ministries including the foreign ministry and the trade ministry are joining hands to handle the issue."

It has banned South Korean TV programs from airing on its local broadcasters and removed subsidies on cars equipped with Korean-made batteries.

The Chinese tax authorities also launched an investigation into Lotte, a Korean retail giant that does business in China, while South Korean pop artists have been banned from appearing on Chinese TV programs.

But the top economic South Korean policymaker remained cautious in making it official.

"It is a difficult issue because the Chinese government is officially denying its intent of THAAD reprisals," said Yoo. "We will handle it case by case and ministry by ministry. But if necessary, we can consider setting up a government-led response team." 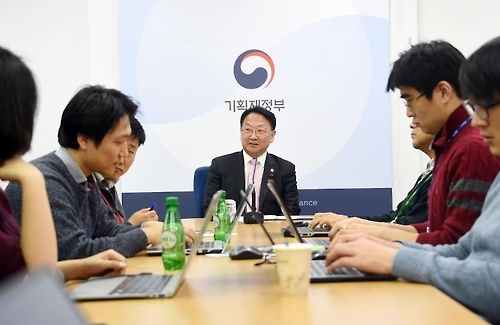 The finance minister also said the government is seeking various ways to reduce the country's current account surplus against the United States, which has blamed South Korea for maintaining its currency weaker than the U.S. dollar.

The U.S. Treasury Department put five countries, including China and South Korea, on its monitoring list in April last year, citing that the countries have a significant bilateral trade surplus and current account surplus with the U.S. and are suspected of having intervened to resist depreciation of the local currency.

Many are worried that the new U.S. government will designate China as a currency manipulator in the coming months and South Korea will also be included in the list.

"The government will make constant efforts to convince the U.S. government that South Korea is clean," said Yoo. "At the same time, we will seek other ways to back up our arguments, such as buying more U.S. products."

He said importing U.S.-made shale gas is one of the options.

"There is room in the energy sector. The government is considering importing U.S. shale gas in earnest," he said. "The state-run Korea Gas Corp. will be the main importer."

South Korea depends nearly 100 percent on imports for its energy consumption, with Dubai crude accounting for about 80 percent of the country's overall oil imports.