Korean Air will issue about 22 million shares at 20,450 won per share on March 27. The stocks will be listed on the main bourse on March 28 after the per-share price is finalized on Feb. 28, the country's flag carrier said in a regulatory filing.

"The funds raised through the rights issue will be mainly used to pay back maturing debts and help enhance the company's financial health," said Kim Chang-hoon in charge of the capital increase plan.

The rights issue will sharply reduce the debt-to-equity ratio which marked 910 percent at the end of September, he said, adding the ratio likely increased further in the October-December quarter due to the won's weakness against the dollar.

A weak won drives up the purchasing costs of fuel oil by airlines, weighing on their bottom line. 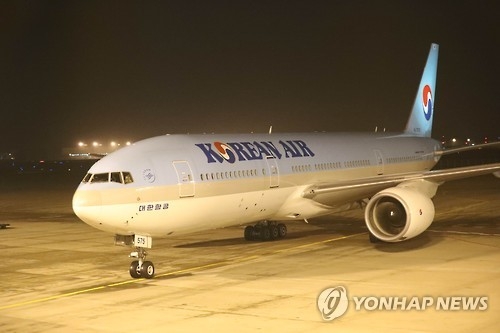 In the January-September period, Korean Air swung to a net profit of 85.09 billion won from a net loss of 695 billion won a year earlier, helped by declines in oil prices.