It was Hwang's first telephone conversation with a foreign head of state since he took over as the acting president on Dec. 9 after President Park Geun-hye was impeached over a corruption scandal involving her and her longtime confidante.

Mirziyoyev was sworn in as president on Dec. 14 following his election victory on Dec. 4.

Under the US$3.9 billion project signed in 2006, the two countries will build a 110-kilometer pipeline to deliver natural gas from a jointly developed mine in Surgil to a chemical plant in Ustyurt. A South Korean consortium, led by the state-run Korea Gas, has a 50 percent stake in the joint project, with the other half owned by Uzbekistan's national gas firm UNG.

The acting president also asked for Mirziyoyev's support for a project to construct a cultural facility for some 180,000 ethnic Koreans living in Uzbekistan. The construction is scheduled to be complete by 2018.

"As a partner for Uzbekistan's development, South Korea has been closely cooperating (with Uzbekistan), and we will continue to cooperate on large-scale (joint economic) projects," he was quoted by Hwang's office as saying. 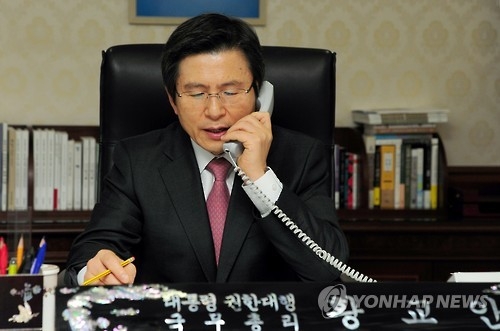